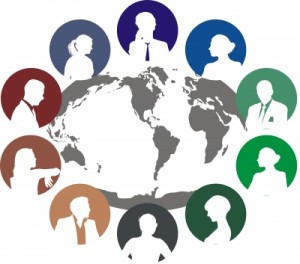 In order to change society it is necessary to understand it. Especially new phenomena that can give a hint as to what is in the making. One important new trend has been peer-to peer production, a new voluntary form of cooperation whose products are shared freely. Based on the previous discussion on this website, here is another contribution to the discussion.

The peer-to-peer movement has been accused of utopianism. While it is true that some pretty far fetched ideas exist in the movement (as in any movement), it is absurd to accuse something which has been developing by leaps and bounds in the past 10-15 years of being utopian.

Wikipedia, Linux, Youtube and other well-known examples are just the tip of the iceberg. IBM was an ailing giant based upon a declining mainframe (giant computers) market and with a failed venture into PC’s under its belt. By latching onto peer-to-peer production, in fact even paying people to participate in it, it managed to transform itself into a successful computer service company. Another example is Lego — a well-known toy and building-blocks manufacturer. Initially it considered sueing those that reprogrammed their Mindstorm robots, but quite soon changed its mind and instead incorporated a “right to hack” into the software licence. This transformed Mindstorm into an unparalleled success for Lego.

One approximate measure of the extent of peer-to-peer production is the so called fair use industries. These are companies that make use of exceptions from copyright. They have grown rapidly over the past decade. These include manufacturers of consumer devices that allow individual copying of copyrighted programmes, educational institutions, software developers and Internet search and web hosting providers. In 2006 accounted for one sixth of total U.S. GDP product, and employed more than 17 million workers. The productivity of workers in these industries exceeded others by an average of 28 percent.#

The essence of of peer-to-peer production is in its non-hierarchical and voluntary structure. Nobody can force you to contribute to Wikipedia. Peer-to-peer production is based on a strong intrinsic motivation among the peers. All those participating do so because they want to and because they have knowledge which they can contribute. In the main, peer-to-peer is self-organising. Like a pulsating, growing, uncontrollable organism it encompasses more and more parts of society. By virtue of its ability to mobilise the best questions and answers anywhere in the world it provides an unbeatable method of advancing knowledge.

This is a far cry from the rigid structures of most capitalist companies. It is also a long way from the visions of socialism that predominated in the not so distant past. Authoritarian competing companies with managers appointed by the owners were to be replaced by ‘one giant factory’. All parts of this factory were to be organised within the framework of a central plan. The managers of this socialist factory were also to be appointed by the owners, in this case the working class, i.e. the majority. And there were no few socialists that envisaged themselves in powerful positions at the top.

The death of this old vision of socialism is not only one of the byproducts of peer-to-peer production. It is also the result of the collapse of the Soviet Union and the evaporation of the illusion that socialism can be built by taking capitalism into public ownership one bit at a time.

The potent combination of the disappearance of the USSR and its political model, the disintegration of the popular socialdemocratic agenda for abolishing capitalism, and the spread of the internet and peer-to-peer organisations is also the death-knell of the old organisational structures of left organisations. Whatever form of internal democracy or democratic centralism they had in the final analysis they boiled down to the same thing. An inordinate amount of power was concentrated in the hands of the leadership because they controlled the main means of communication. They could limit the public expression of discontent with the policies of the leadership, creating a claustrophobic internal regime.

No more can tin-pot generals command an organisation up the hill just because they have a mandate from Stalin, Olof Palme, or even from a formal vote at a congress. Instead, any leader will now have to convince as many as possible to take the course of action that he or she proposes, and accept that some will not be convinced and stand on the side-lines. Leaders have to listen to and take in what members say and think, if they are going to build something new and not just rely on old decaying structures.

The idea that our leaders were supposedly capable of commanding vast organisation whether they be companies or political parties inevitably gives rise to a cult of personality. Leaders are deemed to possess some special ingredient that makes them uniquely qualified to be a leader. In a self-reinforcing process leaders encourage that picture, and many of the led demand of the leaders that they fall into that pattern.

The crass reality is something else. The Peter Principle which states that people rise to their level of incompetence, where they simply get stuck. In the long run it means that in any hierarchical organisation incompetents rule at all levels. Except the bottom, which is where you will find the people that actually do the work.

The winners of 2010 IgNobel Prize (an American parody of the Nobel Prizes given for seemingly unusual or trivial research, which none the less make a serious point) proved that random promotion is more effective than people being promoted from above. It might seem like a joke, but it certainly corresponds to most workers’ experience of leaders at workplaces and in political organisations.

Just like most death processes the death of the one-factory-socialism vision and democratic centralism undergoes five phases of grief:

Of course some on the left are still stuck in denial, but more and more are moving to acceptance. This opens up a vast new potential for socialist ideas. The straightjacket of the old organisational mode can be cast aside.

Socialism can be reinterpreted, developed, and implemented through the active participation of a huge swathe of humanity.