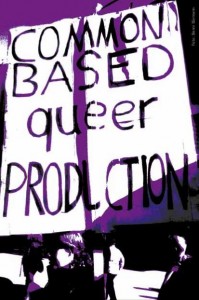 The workshop has been organized by the Rosa-Luxemburg-Stiftung which is the foundation of the party „Die Linke“ in Germany. „Die Linke“ is the socialist party in Germany. As far as I understood the Keimform people co-organized this event.

The workshop has been attended by about 40 persons. At least 8 of them were on the Oekonux list at some point. It was very nice to meet all these people again — some of them I had not met since years.

Some other people came from the broader commons debate. Most of the remaining attendees I’d consider coming from the classical left which is of course what „Die Linke“ is.

The topic of the workshop was: What does the concept of commons mean for the left in general and for „Die Linke“ in particular.

Well, I’m not really into this commons debate but my impression is this: It is composed of two discourses which IMHO have nothing to do with each other. One of the discourses is the commons based peer production discourse which is put forward by people like StefanMz and ChristianS. I.e. the topic of the Oekonux list. The other discourse is a very classical left discourse with all the same old, same old questions and approaches. Here are some aspects which IMHO mark the boundary:

Well, as I said I’m not really into the commons debate. But my impressions from Berlin strengthened my scepticism: There are two discourses where the classical left discourse in a nutshell is old wine in new bottles. I see that the visible peer production realms like Free Software and Wikipedia do inspire the classical left. But they don’t really understand what happens in front of their eyes. They prefer to do and think the same old, same old, instead. Like generations before them.

I thought about possible reasons for this. After all these people want to engage for a viable alternative — why do they spend their time with pointless activities then? May be the classical materialist saying that the being determines the concsiousness (Marx) applies here. Many of these people are not involved in the digital commons/peer production — probably most of them still even prefer M$. So they have no practical idea of what peer production may mean. Yet they don’t understand this concept. And look at Oekonux for another hint: Many of the most influential people are into both: Politics and technology including peer production.

An extreme variant of this ignorance of modern thoughts was the main topic of one talk. In the brand new party program of „Die Linke“ the word „commons“ does not appear at all and also the German translation „gemein…“ does appear only once. This after some years of commons debate in the left. Although this is not really surprising IMHO it makes finally clear that „Die Linke“ is not useful for a promising project. This is a pity IMHO.

The whole workshop reminded me of a picture which came up in the Oekonux debate long ago. There are two ways of dealing with the ever rising flood: Build dams to protect the existing or build ships to sail for new shores. The classical left discourse IMHO focuses on building dams. They want to protect what is. The peer production discourse is of course a ship builder approach.

I like this picture because it makes clear a couple of things. For instance that both approaches are needed. At the very least the ship builders can not build ships when there are no dams to protect them From the flood. But the most important difference this picture illustrates is this: For building dams you need a completely different set of abilities and tools than for building ships.

You even need different mind sets. Dam builders need to prefer strength, firmness, immobility and stability and are interested in the past and presense they want to protect. They fight against something. Ship builders need to prefer dynamic, agility and are interested in new horizons. The fight for something. In a way it is funny and sad at the same time that today those who think they are oh so progressive turn out to be so conservative…

I often compare our time with early capitalism. When I project the current commons discourse into this time I’d say that it is a discourse between the early capitalists and the rebel fraction of the nobility. While the first opposed monarchy the second only wanted a different king. How should this possibly work?

Well, as you may imagine there were very little to learn for me during this workshop beyond some impressions of the commons debate. However, one thought was new and after all this sceptical stuff I’d like to share it with you.

We talked about needs and an older woman from Austria told that she well remembers a time when it was simply clear that you get a job and there is sufficient social security and so on. A situation younger people usually have difficulties to even imagine. She said that life felt differently then and that even the needs were different. I think she is right. And it’s pretty obvious that you don’t need to care much about your social security if it is simply given and you can be sure that this is still the case in 20 years.

In other words: these resources are part of the common infrastructure and it’s clear that they will stay. We discussed this a but further and suggested that insurance models like in health insurance or flat rate models may have a similar effect although on a paid-for basis.